So how did we get here? Well we are obviously all craft beer lovers who have the good fortune to live in West Michigan during a renaissance of the craft beer industry. One evening over a pint we were talking about how we could get involved in the growing West Michigan beer industry. It was during this conversation that we started our initial business plan.  So our business was truly started on a bar napkin. Less than 10 months later, with the help and support of our family and friends, we launched our first tour. 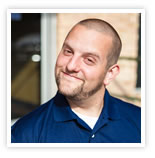 John has had a front row seat for much of the growth of the Michigan craft beer industry. From 2007-2013, John wrote about the beer industry for the Kalamazoo Gazette and MLive Media Group. John co-founded the Michigan craft beer blog, KalamaBrew, in 2007. Over a pint or two during the summer of 2012, John floated the idea of a beer bus that could help people safely enjoy their favorite West Michigan brewers. Today that idea is a reality. John is a Western Michigan University graduate who is married with two kids and two cats. 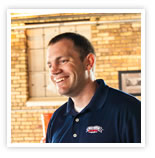 Aric is an entrepreneur who has spent most of his career building and managing businesses in the software industry. During his travels he had many opportunities to do beer tours in other cities. When John suggested a beer tour company in West Michigan Aric jumped on the opportunity to create a new business related to West Michigan breweries. Aric is currently on the board of directors for Junior Achievement of West Michigan and also advises other local area businesses. Aric is a graduate of Calvin College and has an MBA from the University of Michigan. He is married to a fellow beer lover and has a dog named Bo. 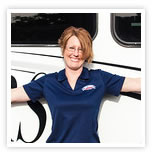 After graduating from Calvin College, Lisa became a successful realtor in West Michigan. Over the years she has developed quite a taste for craft beer. As such she frequently promotes the West Michigan’s craft beer industry when providing community tours to people who are considering moving into the area. She was surprised at how many people from outside of the area already knew about our local breweries and were looking for opportunities to visit them. When she heard about the idea to create West Michigan Beer Tours she threw her support behind. Lisa is helping to build our partnerships and working with companies on creating private tours.

She joined WMBT in the summer of 2014 and excels at customer service. A close follower of the craft beer industry and a well-traveled brewery adventurer in her spare time, she brings a high level of professionalism to the company. She currently works as an account manager at a marketing agency.

Bonnie’s nickname used to be “Beer” because she had a way of talking friends into joining her for a few.   She loves to introduce people to new flavors and experiences that craft beer brings. Bonnie was at the forefront of the Michigan hop growing revolution and is a huge advocate for using Michigan ingredients.

As a lover of craft beer, Mark turned that love into becoming an adult craft beverage enthusiast community leader. In 2013, he started a Facebook group called DrinkGR, with the intention of creating a friendly space to promote the Grand Rapids-area adult craft beverage producers and a place for enthusiasts to share their passion for what they’re drinking. Not long after, he created DrinKzoo with the same intent because of demand from people who wanted the same type of group for their adult craft beverage community. Mark also works for Beer City Glass, a screen printer who caters to the adult craft beverage industry, where he does graphic design work, along with sales & marketing.

Mike Babb has over 40 years experience in the brewing industry from local to global; from craft brewer to multi-national.  His education includes Colorado Mines BS Chemical Engineering, Technical University Munich-Weihenstephan Brewing Science & Technology, and Colorado Christian University MA Education & Curriculum Development. He worked for the Coors Brewing Company for 25 years ranging from General Brewery Worker to International Head Brewer, and 15 years at Chicago Siebel Institute of Technology as a brewing faculty member. Mike came to West Michigan to work for Kalsec as the Hops Advanced Product Director in 2003.  Kalamazoo Valley Community College contacted Mike in 2014 to develop the Sustainable Brewing Program curriculum and teach brewing. Now retired, Mike’s passion is brewing education and he enjoys interacting with others on brewing science and technology topics.

“The craft beer industry claimed Kassie early on when a career aptitude test listed “brewmaster” in her top five likely professions. Her passion for beer developed during her undergrad at Western Michigan University where she explored the business side of the craft beer industry and helped create a niche festival featuring alumni-owned breweries. Kassie was recruited by the Michigan Brewers Guild and volunteers at festivals around the state. She currently is working on her MBA at WMU.”

Through working for a local craft brewery starting in 2016, Julea found her passion for the “liquid art.” She furthered that passion with a certificate from Kalamazoo Valley Community College’s Sustainable Brewing Program in 2019. Julea is also a member of Fermenta, the Michigan-based non-profit trade group initiated by women, committed to education, networking, diversity, and empowerment within the fermented beverage and food industries. Through Fermenta, Julea received the Level One Certified Beer Server and is pursuing a Cicerone Certification, while also serving as a manager a Kalamazoo-area brewery. She’s also frequently posts her “Beerstagram pictures” of craft beer in nature.

As a lover of the hospitality industry for more than 20 years and a self-educated craft beer lover, Nichole has furthered her education by assisting with the brewing process as the tap room manager at Boatyard Brewing Company in Kalamazoo. “I am excited with the prospect of sharing my experiences and knowledge with others.”

Jeff is a plant fanatic and a craft beer fan since around it’s inception. He likes plants and beer so much, he and his wife, Bonnie, combined their love of both and have farmed hops for more than a decade now. They used to visit every brewery as they opened around the state, but have fallen far behind and look forward to continue their own personal brewery visits when not hosting a tour for you.

A lover of quality Michigan beer and a breaker of hearts. He frequently travels with our guests as they explore Michigan beer together. He’s more popular than you are.