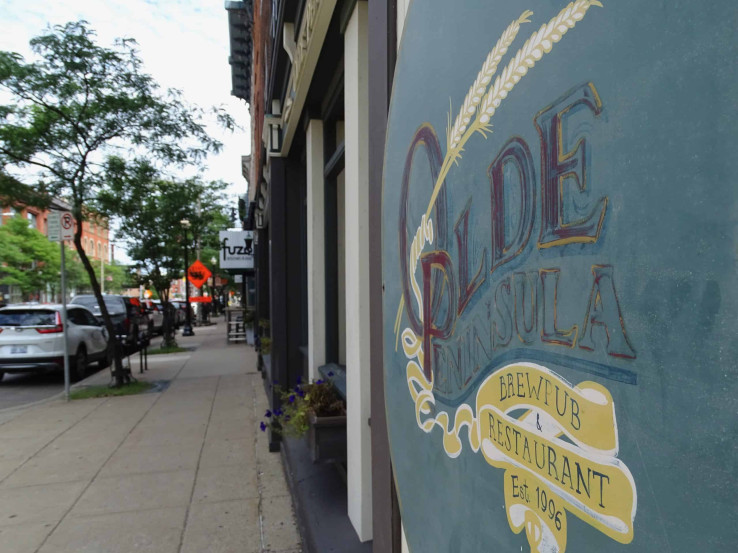 We started work on this blog post the same day Bell’s Brewery made what is likely the biggest beer news in the United States this year.

While the announcement from the 7th largest craft brewery in the country rightfully grabbed the spotlight, there are several other pieces of notable beer news in the region. We’ve compiled several of them here in this roundup of local beer news.

The annual celebration of locally-made craft beverages — beer, wine, spirits, mead and hard cider — will be held Jan. 29 through Feb. 6. Breweries, wineries, distilleries, meaderies, bars, restaurants and others will collaborate in a series of specialty events, including pairings, tap takeovers, activities and more. You can keep updated on #KCBW2022 here.

Downtown Kalamazoo’s Brewery Outre, a four-barrel brewery with a 2,300-square-foot taproom in the Harrison Circle Apartments, 567 E. Ransom St., is inching closer to its grand opening. Found and brewer Ted Linabury said on Nov. 15 that his brew system is being shipped from Oregon this week and he’s started ordering kegs and ingredients for brewing. He’s optimistic for some soft opening events and mug club membership sales to start in December. Ideally, the grand opening will coincide with Kalamazoo Craft Beverage Week, which will be held Jan. 29 through Feb. 6.

Valhalla, currently located at 3408 Miller Road, will be shifting operations closer to Downtown Kalamazoo in the coming months with its line of Norse Nectar meads and eventually Union City Brewery beers, president and COO Thom Macquire told MLive.com in September. Macquire said he hopes to move the business to the 4,000-square-foot space at 530 W. Kalamazoo Ave. You can read more here.

After pandemic-fueled delays, Murray Street Brewing Co. is poised to open in December, giving Mattawan, about 30 minutes west of Kalamazoo, its first brewery. The team of four owners, including brewer Tim Ginter who most recently worked at Gonzo’s BiggDogg Brewing Co., started brewing beer in November and have been working feverishly to renovate the building, which formerly housed an antique store. You can read more about it here. Keep on eye on their Facebook page for a grand opening date.

Kalamazoo Valley Community College’s Sustainable Brewing Program continues to serve its food and student-made beer on Tuesdays into December. The program, which won a bronze medal at the Great American Beer Festival for its strawberry, hibiscus, line Gose in September, serves a variety of pairings from 4:30-6:30 p.m. on Tuesdays through Dec. 7 at the Marilyn J. Schlack Culinary & Allied Health Building, 418 E. Walnut Street, Kalamazoo.

The Hicksville, Ohio-based brewery opened its Coldwater location on Nov. 4. The brewery describes itself as, “a great place to enjoy dynamite craft beer and tasty pub favorites with a twist. We love drinking quality beer, so much that we decided to make it. We loved making it so much, we decided to share it with our family and friends. They loved it so much we decided to bring it to the masses. Hence, Two Bandits Brewing Co. was born. In 2017, our Hicksville, Ohio, brewpub opened. In fall of 2021, we expanded with a location in Coldwater, Michigan. We’re all about craft beers with unique flavor combinations and many locally-sourced ingredients, served alongside tasty pub food. Two Bandits, 61 W. Chicago St. Coldwater, MI 49036, is open from 5-9 p.m. Thursday; 3-9 p.m. Friday and Saturday. For more information, call 517-924-0623.

After spending most of 2020 closed and eventually selling its assets to Saugatuck Brewing Co., Creston Brewing opened under new ownership on Oct. 19. The Grand Rapids brewery retained Creston brewer, Scott Schultz, and plans to serve Creston beer and Saugatuck Brewing Co. beer. You can learn more about the transition here.

In more Saugatuck Brewing Co. news, the brewery’s Downtown Kalamazoo location announced its plans to move a few blocks closer to the heart of the city center earlier this month. The brewery, currently located in an former auto dealer showroom, will occupy the space formerly used by longtime Kalamazoo brewpub, Olde Peninsula Brewpub, which closed this summer due to COVID-19-related issues. There are more details available here.

Owner Chris O’Neill talked to Now Kalamazoo about major changes to the Milwood Neighborhood brewery in Kalamazoo. O’Neill said One Well will be removing its children’s area and increasing its game offerings, including adding pool tables. The addition will be rolled out to the public as part of the brewery’s anniversary celebration on Nov. 26.

About 6 months ago from Michigan Beer Tours's Twitter via TweetDeck

About 6 months ago from Michigan Beer Tours's Twitter via TweetDeck