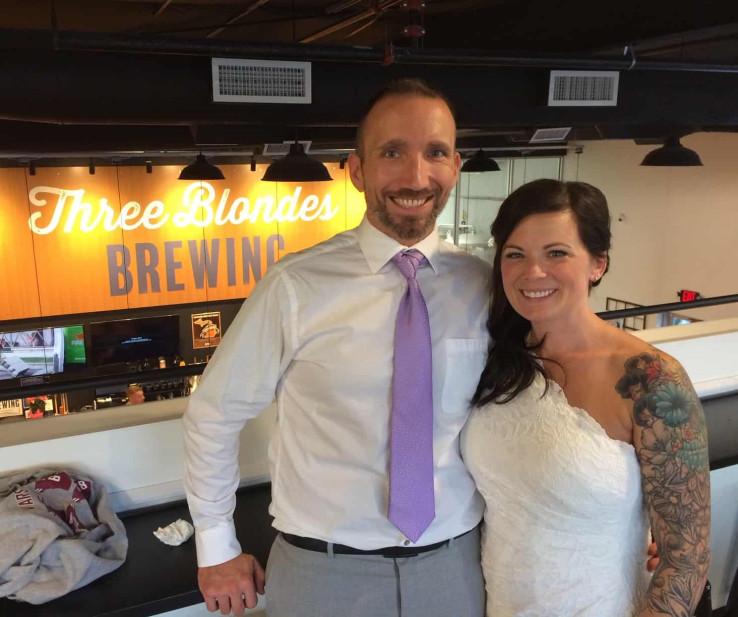 SOUTH HAVEN, MI — If there isn’t a joke about losing power on your wedding day, Vanessa and Jared Chrzanowski could probably make a few suggestions on creating one.

The Hartford couple tied the knot on Saturday, Feb. 22 — the palindrome 02/22/20 — at Three Blondes Brewing in South Haven despite a widescale power outage the afternoon of its wedding. Vanessa said brewery co-owner Carrie Troyer emailed the bride-to-be as she was getting her hair done for the informal wedding. The cause of the outage was not immediately known and officials with Indiana Michigan Power estimated about 3,400 customers were without power starting at about 8:30 a.m. that day.

“Everything we do is unconventional and outside-the-box,” Vanessa said. “It stood to reason our wedding would be the same.”

Troyer said this was the first wedding held at the brewery, which opened in June 2018. She was at her home in South Haven getting ready to drive to Comstock Park for the Michigan Brewers Guild’s Winter Beer Festival when brewer Jake Demski told her about the outage while picking up beer for the event.

“My heart sank. I was like, “Oh no. The bride is going to be devastated and potentially angry. But her response melted my heart,” Troyer said.

Vanessa and Jared decided the ceremony would move ahead and they would make the best of the situation. Vanessa texted her soon-to-be husband a series of emojis and the news of the outage. He replied the show must go on and “we’ll have the place to ourselves.”

“When you have an outdoor wedding in the summer, you have a backup plan. You don’t plan to have the power go out in the whole city” in the winter, Jared said.

Officials estimated the power could return as early as 1:30 p.m.

The wedding was scheduled to start at 3 p.m. with pizza and beer to follow. Troyer said she was relieved the couple could roll with the circumstances and kept her commitment to host the ceremony.

“I let my staff know that she (Vanessa) is game. ‘I need you to be there and do whatever you can to help,’” Troyer said she told her staff. “I confirmed the water worked and the beer still flowed.”

The wedding party, including three of Vanessa’s four children — groomsmen Isaac, 18, and Austin, 16, and flower girl Eliana, 5 — made final touches by cell phone flashlights in the brewery bathrooms. Vanessa’s oldest son, Jacob, 19, is serving with the U.S. Army in Hawaii and could not attend the ceremony.

The windows surrounding the loft space at Three Blondes let in enough natural light to both illuminate and heat the wedding space for the 25 people in attendance. The power returned about an hour after the couple became official.

“We’ve reflected on it every day since then and we asked what would we change if we could change anything. The reality is nothing. It probably made the day better,” Vanessa said.

The couple’s first date was at Arclight Brewing Co. in Watervliet and they were engaged in December at Greenbush Brewing Co. It makes sense another milestone came at a Michigan brewery.

“Their staff was overly welcoming, especially considering they were supposed to be closed,” Vanessa said of Three Blondes Brewing. “They went above and beyond the entire time we were there. We really appreciated it.”

Positivity report: See how the community has rallied behind a couple local breweries during the pandemic. #mibeer #discoverkzoo westmichiganbeertours.com/cat… pic.twitter.com/V9udlMl2C5

About 4 days ago from Michigan Beer Tours's Twitter via Mailchimp