Steinman, of Plainwell, was the co-founder of Hop Head Farms and now works as part of the Land Stewardship Team at Bell’s Brewery Inc. Steinman was at the forefront of Michigan’s hop industry when she launched the 30-acre farm in Hickory Corners with her husband, Jeff. Steinman remains heavily involved in the industry and makes some of finest beer cheese anywhere. 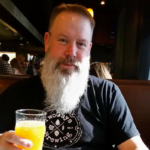 “I am so excited to officially be a part of the WMBT team. I used to love hosting tour groups at the hop farm and show off what great beers can be made with Michigan ingredients. I could not be happier to now be able to continue to share my perspective with the public,” Steinman said.

Curtis, of Byron Center, has been instrumental in the responsible promotion of Beer City USA for several years, while also working for Beer City Glass. In 2013, he started a Facebook group called DrinkGR, with the intention of creating a friendly space to promote the Grand Rapids-area adult craft beverage producers and a place for enthusiasts to share their passion for what they’re drinking.

Not long after, he created DrinKzoo with the same intent because of demand from people who wanted the same type of group for their adult craft beverage community.

“I’m totally stoked to be able to share my passion for craft beer with others. I love when a beer recommendation I make hits the spot for someone!” Curtis said.

Curtis will help lead a series of walking tours of downtown Grand Rapids breweries during GR Beer Month, as well as more events in the spring and summer. Steinman will continue to support efforts across West Michigan.