Lagunitas Brewing Co. founder to jam with his band as part of tap takeover at Kalamazoo Beer Exchange 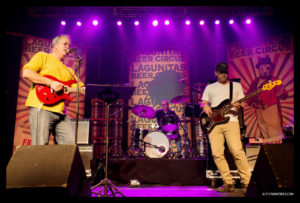 In conjunction with the Thursday, April 21 performance, which will begin at 9 p.m., there will be a Lagunitas tap takeover starting at 11 a.m. at the Kalamazoo Beer Exchange, 211 E Water St.

There is no cover charge for the event.

The northern California-based brewery was founded in 1993. In addition to its Petaluma, Calif., brewery, Lagunitas opened a brewery in Chicago in 2014. Between the two facilities, Lagunitas produced around 800,000 barrels in 2015, which makes it the 10th largest overall brewery in the U.S., according to the Brewers Association. For comparison, Bell’s Brewery Inc. ranked, 12th while Founders Brewing Co. is 20th.

Magee, a long-time critic of “Big Beer,” and Lagunitas made headlines when Heineken purchased a 50 percent stake in the company in September, 2015. The Press Democrat reported the brewery was valued at $1 billion and the largest of its kind in the craft beer industry at the time.

“For us, we don’t need assistance here in the United States. But there is the whole world to think about,” Magee said in an interview. “We can partner with one of the world’s greatest family-owned, really beer-centric companies to find our way into all of these markets globally.”

Magee also wrote about the deal.

For more information about the event, call the Kalamazoo Beer Exchange at 269-532-1188.