One Well Brewing to close deal on new production facility in April, cans to follow 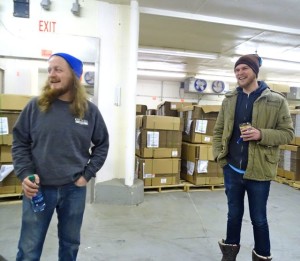 One Well Brewing co-owners Chris O’Neill, left, and T.J. Waldofsky, walk through the new production facility for the brewery.

KALAMAZOO, MI — Backed by sales that nearly tripled their expectations, T.J. Waldofsky and Chris O’Neill, co-owners of Kalamazoo’s One Well Brewing, plan to close on a new 10,000-square-foot production facility in mid-April.

The facility at 3618 Gembrit Circle in the city’s Milwood neighborhood will house a 15-barrel brewhouse and contain ample refrigeration space. Waldofsky floated a cooperative brewing space concept several months ago, but the brewery has decided to take on the initial expansion steps on its own.

The new facility will be for production purposes only and the taproom will remain intact.

“This new move with production being off-site will allow us to produce more beer, free up a lot of space in our current taproom and more room for our kitchen to expand,” Waldofsky said.

Waldofsky said the project, which will cost more than $1 million, is waiting final funding approval. It’s expected to come on April 15, he said. One Well Brewing will rent the space from a new company, One Well Brewing Productions LLC. The company will then begin extensive work on the facility that was a meat processing facility for the Hoekstra Meat Company and most recently as a storage facility for Davis Creek Meats. Waldofsky expected at least six months of work on the building, including upgrading the refrigeration and the heating, cooling and ventilation system.

Once completed, the production facility will drastically increase its brewing capacity and create additional opportunities for partnering with other regional breweries, especially those limited by space, Waldofsky said.

O’Neill currently brews on a three-barrel system at the brewery’s taproom, 4213 Portage Road, and produced just under 500 barrels in 2015. One Well opened in November, 2014. The new space could give One Well the potential annual capacity of between 4,000-5,000 barrels, although those numbers are several years down the road. Waldofsky said they hope to begin brewing in the space in late 2016/early 2017. 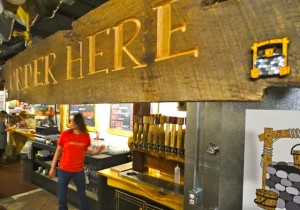 One Well Brewing opened in November, 2014.

Waldofsky said they will have more than enough cold storage for its beer and will have space available for other breweries to store their beer on site. Waldofsky said One Well will be able to partner with two to four other regional breweries to use the brewing equipment in its new space, allowing smaller breweries to produce large batches of beer when they may be constrained by their existing brewery space or equipment.

“Prior to taking on any tenants for the brewery, we want to make sure we do what we do really well so that we’ll be able to offer more services to other breweries,” Waldofsky said.

Waldofsky is also exploring partnering with Michigan Mobile Canning, a Kalamazoo/Traverse City-based company that travels throughout the state and Midwest canning beer for breweries.

One Well also plans to can its beer, including the popular Xalapa, a jalepeno blonde ale, and Sweet Water Street, a coffee and doughnut porter.

Waldofsky said he’d also like to install brewing laboratory to be utilized by One Well and other regional breweries.

“The unexpected growth we’ve seen over the last year has allowed us to reinvest in this project and that we think will help us in the future,” he said.

One Well becomes one of the latest Michigan breweries to announce expansion plans, alongside Griffin Claw Brewing Co., of Birmingham, Elk Brewing, of Grand Rapids, Paw Paw Brewing Co. and others.