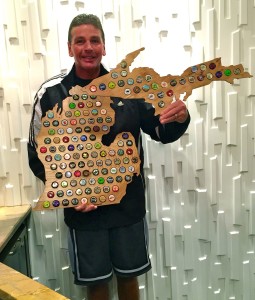 Patrick and Renee Flynn, of Kalamazoo, won the drawing for the Michigan Beer Cap Map, a promotion from Kalamazoo’s Nature Connection as part of the 2015 Walking Tour Series.

All guests on the 2015 Walking Tour Series, which ran May 30 through Aug. 30, were eligible to enter the drawing at Nature Connection. The Flynns were randomly selected out of hundreds of entrees. The couple attended the July 11 walking tour.

The Beer Cap Map is a Madison, Wisc.-based company that makes similar maps for several U.S. states, including both the upper and lower peninsulas of Michigan.

The Beer Cap Map is sold at Nature Connection, which is located at 359 S. Kalamazoo Mall in downtown Kalamazoo. It sells a variety of Michigan-made and Michigan-related gifts, including bottle openers and glassware and more.