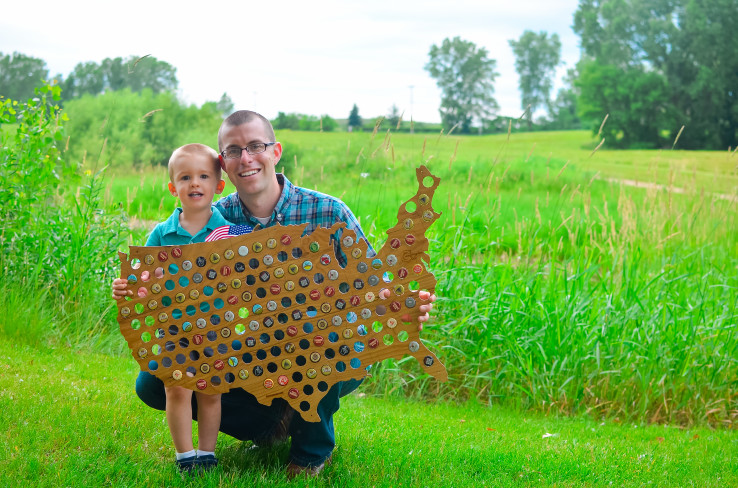 KALAMAZOO, MI — Steve Latham thought there was the making of a startup company in his friend’s wooden bottle cap map design.

Latham and his friend and boss, Jesse Darley, work at a product design firm in Madison, Wisc. Darley’s son Jasper requested something to house his growing collection of bottle caps he accrued at backyard barbecues and other social gatherings. Using a laser cutter from work, Darley, 42, crafted a bottle cap holder in the shape of Wisconsin. After visiting Darley’s house, Latham said he saw a small business opportunity: Beer Cap Maps. 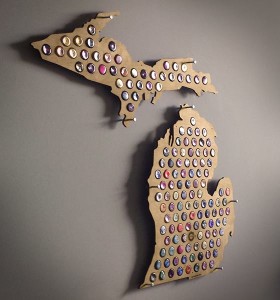 The Michigan Beer Cap Map is the top-selling of the 50 U.S. states.

Five days after posting the product online, Beer Cap Maps recorded its first sale last winter. Less than a year later, the company has been featured in Real Simple, Food Network Magazine, Parade Magazine, Playboy.com and other media outlets. It makes maps of the entire U.S., individuals maps of all 50 states and 10 other countries. Beer Cap Maps in the midst of its first full-scale holiday season.

“It’s beyond anything we could’ve dreamed,” Latham said of the response during a phone interview from Wisconsin.

“You can imagine we have tons of Michigan pride in our family,” said Latham, who is married with two children.

Latham said Michigan is followed by Wisconsin, California, Ohio and Texas in terms of individual state sales. He said people use them in several ways.

“Some show their single favorite beer, some use it to explore new locations and breweries, some use it as a guide for weekly tastings,” he said.

As demand for the maps grows, Latham and Darley pulled in more resources. The company that started in the basement now requires more equipment, more staffing. Latham said the company has partners in Milwaukee and West Michigan to help with cutting and finishing maps.

“They are cutting maps around the clock,” he said.

A majority of sales are done online, but retailers are increasingly selling the maps as well.

The Nature Connection in downtown Kalamazoo was one of the first retailer in Michigan to carry the maps starting this spring, according to Beer Cap Maps.

“They’ve done fabulously. If people want them for Christmas, I suggest they buy them sooner rather than later,” Nature Connection owner Laurie Russell said.

Latham said their experience with materials and supplies helped for a successful launch.

“We’ve always wanted to have something of a small business, it’s just crazy this is the idea that went,” he said. “Sometimes it takes stepping back and doing something fun.”

Recently, Beer Cap Maps launched special edition ornaments for some of its top maps: U.S., Michigan, Texas, North Carolina and California. Latham is anticipating a rush of holiday orders as the season approaches, but it’s a good problem to have.

“This is going to be a whole new world. Christmas happened early,” he said.

For more information about Beer Cap Maps, go to: www.beercapmaps.com.