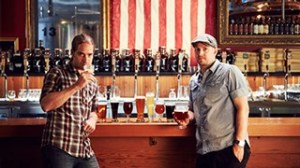 It’s just one of many frozen adventures to be spotlighted on the show.

“Brew Dogs” stars brewers James Watt and Martin Dickie, who own Scotland’s BrewDog, as they travel the United States learning about the local beer culture while creating unique brews along the way. The “Brew Dogs” team visited Michigan in January and attempt to make “the perfect Michigan eisbock” along with Kosmicki and company.

While in Michigan, the “Brew Dogs” traveled the state, including visits to Muskegon’s Winter Sports Complex (see below), Kalamazoo, Ann Arbor and more. They visited at least 7 breweries and several craft beer bars.

The episode will air at 10 p.m. May 6 on Esquire Network. Several watch parties are planned around the state.

Here are some of the episode trailers released online:

James and Martin try to luge with a beer at the Muskegon Winter Sports Complex in Michigan.

James and Martin are in Michigan with Founder’s Brewery to craft the perfect eisbock in a frozen lake.

Martin and Jeremy, from Founder’s Brewing, mash in above the ice while James keeps an eye on the mash tun below the freezing waters of Higgins Lake.