Second Wave Media: A Second Round: “Beer writer, friend find new use for all that knowledge” 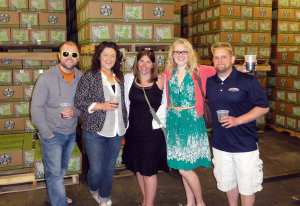 If you have spent any time in Southwest and West Michigan lately, it’s impossible to miss the current boom in craft and micro breweries.

Almost every town, no matter how small, has a brewery popping up, offering its handcrafted libations to an ever-growing number of local beer enthusiasts.

But did you ever wonder what goes into making your favorite styles of local beer? Did you ever consider the stories behind names of beers like “Plead the 5th” and “Lock Down Scotch”? And did you ever wish someone would give you a ride to another brewery?

Well, West Michigan Beer Tours is here to help. The brand new business, founded by Kalamazoo’s John Liberty and Aric Faber, aims to educate the public on all things craft beer while also supplying a fun, safe way to get to many of the area’s best breweries.

“There are three main components that we are stressing in our company: education, relaxation, and responsibility,” Liberty says. “The last thing in the world we want is a drunk bus. The breweries aren’t about that and neither are we.”

The company hosted its inaugural tour on Saturday, May 22, by shuttling a group of beer lovers from Bell’s and Boatyard Brewing in Kalamazoo to Marshall’s Dark Horse Brewery and Battle Creek’s Arcadia Ales before returning to Kalamazoo.

Guest took tours of each brewery, were given snacks for the road, and had plenty of opportunities to learn about and enjoy craft beer.

“This is an opportunity to let people have an exciting and safe introduction to the craft beer industry,” says Brian Steele, co-founder of Boatyard Brewing. “It gives everyone an opportunity to travel, and the camaraderie that goes along with that travel is also nice. There are so many breweries in southwest Michigan and they all have unique styles. I think this gives people an opportunity to experience all of those styles.”

Like many good business ideas, the genesis of West Michigan Beer Tours came following a rousing game of wiffle ball.

Liberty and Faber, teammates who play in the Kalamazoo Wiffle League, were celebrating a victory with a postgame brew and the idea for a safe, educational, and fun way to show off the local brewing scene came up.

“We had a funny conversation after wiffle ball at a bar in Kalamazoo and now about year later it’s actually happening,” Liberty says. “Aric has put a lot of hard work in to make it happen. He knows the business end and I know a little bit about the beer world. We’ve combined those forces into what we hope is a very rewarding experience for everyone.”

Liberty indeed knows “a little something about the beer world.” As an original writer of the Kalamabrew blog, and an entertainment writer for the Kalamazoo Gazette, the career journalist has for a number of years reported on the area’s growing craft beer scene.

Now he and Faber are taking what Liberty has reported on and offering it up in tidy, well-organized, and fun packages.

The company is currently working with area coach lines, but hopes by this time next year to own its own bus.

Besides just touring area breweries, Liberty also hopes to be able to educate patrons on the links between the local agriculture and brewing industries, and how the two work together to put fresh beer in your glass.

“There is a whole scene going on and we want to tie it all together,” Liberty says. “We want to let people know about. For example, we’d like to take a group of people to HopHead farms and help them pick some hops. And If there is a load that needs to be delivered we’ll drive it in our bus over there, drop it off, and watch the brewers do what they do.”

For information on future events or to book a tour with West Michigan Beer Tours, please visit their website.