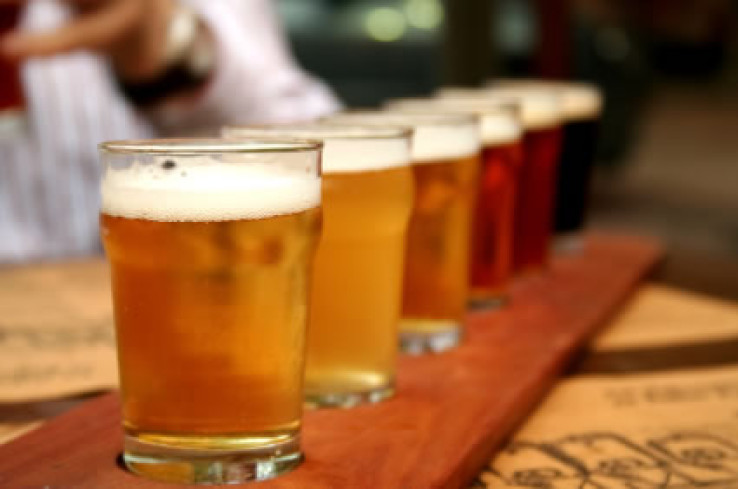 On May 25th we kicked off the 2013 summer season with our first tour.  Thanks to all the brewers and friends who made this tour possible.  I couldn’t think of a better way to kick off the summer!

Our tour started off at Bell’s Eccentric Café.  It seemed fitting that for our first tour we would originate at the place that really started the craft brewing renaissance in Michigan.  If you haven’t been to the Eccentric Café since their renovations and new menu – you should definitely schedule another trip.

From there we headed north a few blocks to Boatyard Brewing Company.  The contrast from going from the largest craft brewer in the state to a new brewery was very cool to experience.  Boatyard might be new, but they already have a tremendous lineup of beers and a great team of people.  It will be fun to watch them grow their business.

After Boatyard we boarded the bus for a 45-minute drive to Dark Horse Brewing Company.  The team at Dark Horse did a great job.  Not only did Gary give a fantastic tour but the stop in the VIP room was epic.  After that we enjoyed some of their great pizza in the renovated beer garden.  For anyone driving past Marshall I would highly recommend a stop.

From Dark Horse we headed over to Arcadia Brewing Company.  After a 15-minute drive that turned into a 30-minute drive due to an untimely train crossing we were ready for another beer.  At Arcadia, Sean gave a great tour and showed us their unique open top fermenting process.  Once again I was amazed at the diversity of brewers that we had on our first tour.

The best part of the entire day was the feedback we received from everyone involved.  Not only did we get to experience a great lineup of brewers, but everyone involved in the tour was so cool.  I can’t thank everyone enough for making our inaugural tour a memory that I will never forget.  We can’t wait to see you all again!